Many children in the west grow up with their imaginary friends. I had an imaginary uncle.

If an ‘imaginary’ character means someone who occupies your space, your thought, and energy, someone whose existence floats around in the air, then my only maternal uncle in China fit the role perfectly.

My son’s imaginary friends 5 years ago.

My mother’s only brother in China was also illiterate, so all his letters were written by his sons. My friend Jingya asked me in one comment that if the requests from China for money ever stopped. From the letters, I believed that my mother kept sending money to China well into the late 90s, even after I had come to study in England.

I translated letters from China in my past few posts, with the recurrent themes of love, loss, longing, and frequent requests of money and medicines from my mother, who left China in 1937 or 1938.

The earlier letters focused on rebuilding the ancestral home, helping sons getting married, and medicine, but in the 90s, one topic was dominant: Brother was frail.

“Could auntie return to China to see Father for the last time?”

This was the only letter sent by the eldest son, informing my mother that “Father is ill.”

…This is an urgent letter. My father nearly died from high blood pressure, and after months of rescue, his arms and legs are now paralysed. Doctors have warned that my father’s days are numbered.

“Father is dying.” Letter from China.

However, your nephews (we) are all desperately poor. We are sending auntie and uncle this urgent letter.

Please could auntie send me the medicines below for my father? We need the medicines that can treat high blood pressure and angiosclerosis. We also need a Chinese drug called Jiuxin Dan (救心丹 － Heart-saving tablets) to save my father’s life.

Now my father is critically ill. My father has no blood brothers, and I don’t have other adults for me to discuss such a matter either. All my closest family is in Singapore, but auntie, why haven’t you sent us letters these days?

In the past few months, all our neighbours and friends have been asking about auntie, and I’m begging auntie to return to China to see my father for the last time.”

I am capable of treating piles

“By the way, I, your nephew, am now known for treating certain complaints, such as piles (haemorrhoids), and I have a lot of patients from Taiwan and other villages around here. If my cousins in Singapore want to learn my skills, they are welcome to come to China, or perhaps you could apply for me to Singapore to treat patients there?

P.S. I’m lacking in calcium, so my skin has developed eczema. Please could auntie send me some drug to be taken orally, and a few bottles of calcium gluconate.”

Luckily, my uncle survived his illness. My mother was planning her trip to China again.

“Sister, ….I thank the heaven that you’re coming back again to see Brother. We had typhoon recently, but it has not affected the Shantou airport.

Currently, the exchange rate between Singapore dollars to renminbi is S$100 to 334 yuan. After reading this letter, please could sister make some arrangement.” 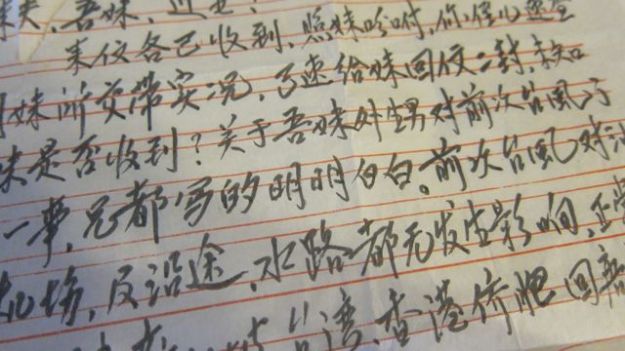 Typhoon was over. My mother prepared her second journey to China.

“….we have not heard from you. We had sent you two letters to let you know that the typhoon that hit China recently does not affect Shantou airport and the transport system has been normal.

There have been many overseas Chinese visiting China from Singapore, Taiwan and Hong Kong. Please be rest assured. …..

Brother nearly died months ago and I miss sister dearly…”

Helps: From money, medicines to travelling to Singapore

Throughout the 70s and 80s, my mother sent money and both Chinese and western medicines to China. Before that, the main supporter was my mother’s adopted sister, because my mother had difficulties raising her own 9 children (one of them died of leukaemia aged 4 in 1964).

However, when the matriarch died in 1979, all burdens landed on my mother. She had no choice. Since then, my childhood was shared with my imaginary uncle. I could sense him in the air. Every word in his letters pulled my mother’s heart. Our sky was often heavily overcast.

Since the late 80s, Singapore was opening up to tourists from China, including ageing relatives from China. My mother had another duty: helping family from China to visit Singapore.

Such visits involved time, paperwork, and a great deal of money.

Since the 90s (or slightly before), the bank has replaced the traditional Chinese agencies for the transfer of money from Singapore to China.

“Thank you for your recent two letters.

Sister, when you returned home to China last year, you treated brother and sister-in-law like you would to your parents. You promised that you would want your sister-in-law to visit Singapore one day. Therefore I have been expecting your letters, to arrange for your sister-in-law to visit Singapore soon. …..In your letter, you mentioned that you had sent me some money, but I haven’t received it yet. When the money arrives, I’ll write to you again.”

Problem: money transfer via the bank is complicated.

“The renminbi you sent us has arrived at the Shao’an Bank, but the details were incomplete, therefore we still could not withdraw the money.

Once sister has received this letter, please reply immediately and tell me how much you had sent, and who did the transfer. If it was your daughter, please make sure your daughter’s name is printed clearly. Please write a letter to me so that I can follow your instructions to withdraw the money soon.

In the future, if you still send me more money, please make sure you must write clearly.

Regarding your sister-in-law visiting Singapore, we’re waiting for sister’s arrangements, after that, the Overseas Chinese Association would help us with the journey.”

“Thank you for your letter, and your money has finally arrived, and I have distributed the money accordingly. Please do not worry……Our neighbours have been praising sister for your love towards your blood brother, and I also hope that you could help sister-in-law realise her dream of visiting Singapore….”

Blood is thicker than water

My mother often emphasised Blood is Thicker than Water. “He is my blood brother” is a sentence powerful enough to rock the heaven and the earth. This statement justifies the behaviours of my mother, who saved, borrowed, begged, or nagged, and did anything she could, to gather money to send to her brother and his family, and sometimes to their neighbours as well. My mother explained it was important to look after the neighbours too（厝边头尾的人) in their close-knit community. It was a mammoth task that my mother had achieved for at least two decades.

Of course, my mother managed to pay for her elderly sister-in-law to visit Singapore for a few weeks. Since then, a few more relatives also visited.

Thank you for reading these stories. When I gather more materials in the future, I’ll continue with this series.