I wrote in April that my neighbour’s husband ‘disappeared’ in the wood one day:

My neighbour’s husband ‘disappeared’ in the wood one day, in the 70s, as he was suspected of supplying food to the communists. He simply vanished from the wood for at least a decade. I remembered watching his wife shriek and thump her fists on her chest and this family had about 10 children to feed.

From “Walking in the wood – Part 1” on Janet’s Notebook

The man’s disappearance caused a stir in our little village. He vanished at a time when communism was still a taboo in Malaysia. Today I heard that Malaysia communist guerrilla Chin Peng 陈平 died in exile in Bangkok, aged 88. Chin Peng represented an era of conflicts of ideas, brutal guerilla wars, and peace in Malaya (later Malaysia), and the news of his death suddenly transported me back to the very scene when I saw my neighbour’s world collapsed.

Who was Chin Peng?

Chin Peng 陈平 was a legendary figure born on 22nd October 1924 in Sitiawan in the Perak state of Malaya. He joined The Communist Party of Malaya (CPM) in 1940 as an ardent and idealistic 16 year-old. He first fought alongside the British against the Japanese invasion, but later became the number one enemy of the British empire.

The headline on the front page of The Straits Times newspaper of 1 May 1952 stated: “NOW IT’S $250,000 FOR PUBLIC ENEMY No. 1—if brought in alive”. The person referred to (and pictured) was Chin Peng.

From fighting Japanese to fighting British

The Communist Party of Malaya was founded in 1930 and laid down its arms in 1989, 3 weeks after the fall of Berlin Wall. The Communist Party signed a Bangkok-brokered peace deal with the Malaysian government on Dec 2, 1989 in Hat Yai city in Thailand.

Chin Peng was decorated with the Burma Star and The Order of the British Empire for his resistance activities during the Japanese occupation of Malaya from 1941 to 1945. However, his wartime OBE award was rescinded, as this patriotic young man turned colonial villain and fought the bloodiest war with the British. 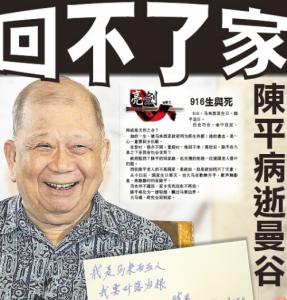 Fallen leaves dream of returning to their roots

In a rare interview with Sin Chew Daily in Malaysia, Chin Peng revealed his wish to return to Malaysia to kneel at his mother’s grave. He also wished his ashes to be placed next to his parents’. However, Chin Peng lost his legal battle since his application in 2004 to be allowed back into Malaysia, and even in death, his remains are barred from Malaysia.

In his handwriting, Chin Peng wrote these Chinese characters in 2009: “I am a Malaysian. I want fallen leavens to return to their roots.”

The purpose of my post today is not about sharing the bloody war itself. I’m going to share with you what I sensed about communism as a small child.

As a child growing up in the 70s, communism was a taboo. I loved my neighbours. This family next to us had about 10 children, so I played with the younger kids close to my age. We played badminton in our little front yard across the barbed wire fence. The shuttlecocks often flew to the rafters, and we had to stand on a chair to try to rescue them with a bamboo stick.

My playmates’ parents came from the Mei County in Guangdong of China, and they spoke the Chinese Hakka language. One day, my friends’ father did not come home after work. After a few days of searching, there was a rumour that my friends’ father, the soft-speaking kind man, was arrested due to supporting the communists ‘in the woods.’ Detectives came to search their house a few times and I remembered the mess of their house afterwards. I peeped through the barbed wire fence. The wife was distraught. The children lost their father overnight.

However, no one actually knew about the details. There was a rumour that the man was very sympathetic, and he might have supplied some food to the communists out of innocence. In those days, a tiny link with communism as such could cost you freedom.

Soldiers of the British Army dismount from a lorry and head into the jungle as the patrol is ambuished by Communist terrorists. © IWM (CT 44)

At about the same time, one of my cousins living next to us also disappeared. A handsome, diligent, and bespectacled young man, he had just finished the high school from our local Chinese school. The adults in my family asked me not to ask question about his disappearance, and never ever ask his parents about his whereabouts. My parents told me that everybody pretended that the young man had gone abroad to study, but in the village, the rumour was that the young man was locked away in a remote island due to his communist activities, or his ideology.

I later read some interesting details about supplying food to the communists in the bandit-infested jungle. In her captivating post, The Nuts and Bolts of Writing, writer Valerie Davies wrote how she was educated at boarding school in Cameron Highlands in Malaya, surrounded by the aborigine and the communist bandits. She described beautifully how she travelled by ‘coffins’, and it took her two days to school, with a complicated plane journey involving Bangkok and Kuala Lumpur. Valerie Davies described vividly the missing food in her school kitchen:

“We never knew the date of the beginning or end of term until the day before, so the bandits couldn’t ambush us. We children didn’t worry terribly. We might have felt differently had we realised that our school food was so awful because the cooks were giving our rations to the bandits surrounding us in the jungle. I learned this from the headmaster some years after I’d left school, by which time they’d uncovered the problem. Every night the school was patrolled by armed guards, but somehow I never really believed the bandits could be so close.”

From The nuts and bolts of writing by Valerie Davies 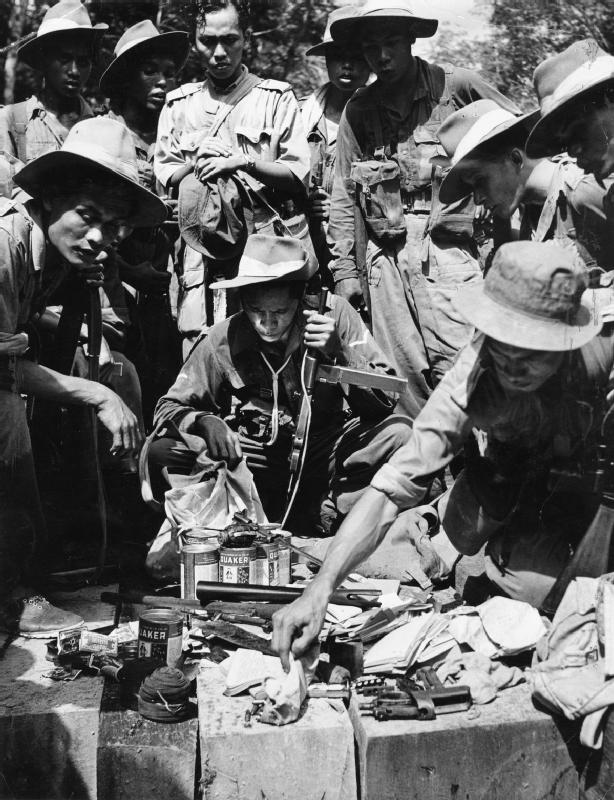 Members of the Malay Regiment inspect equipment, supplies and documents captured in a raid on a communist terrorist jungle camp. © IWM (DM 138)

I was about 8 years old. My playmates’ father and my cousin disappeared, and I was not to ask question. I knew I must abide by the strict rule of silence as it was the command for our own protection. I was shrouded in fear. I knew that something was wrong but could never speak out. Even though I did not understand anything about communism, I respected that it was a taboo.

After a decade or so, my playmates’ father and my cousin were both released. How and why were they released? Were they made to confess and repent? And, under what conditions were they released? No one knew. My neighbours’ father only just passed away early this year, bringing this secret to the grave. He had a simple and fulfilled life after his release, running a small food stall with the help of his children. My family attended his funeral in Malaysia.

The Chin Peng series was inspired by Blog Exercises: What story should I share? by Lorelle VanFossen. You can find more Blog Exercises on Lorelle on WordPress. This is a year-long challenge to help you flex your blogging muscles.

34 thoughts on “Death of a communist leader”