When Padre Eric Cordingly was imprisoned at the Changi prisoners of war camp in Singapore in 1942, he kept a diary with fascinating details. For example, he mentioned how ambitious the POWs were in making their own wine from raisins for communion. When Padre Cordingly suffered from “Tummy trouble” (dysentery) before the Holy Week in 1942, he was treated with Bismuth and chloroform. His wonderful comrades also surprised him with the precious gift of two packets of cigarettes. Now I know from his newly-published diary that cigarettes got occasionally smuggled into the Changi POW camp and they cost ten dollars for fifty, about twenty-five shillings.

Eric Cordingly’s book Down to Bedrock: The Diary and Secret Notes of a Far East Prisoner of War Chaplain 1942 – 1945 is full of heart-warming details of camaraderie amongst the POWs. One day he was offered “several mugs of real tea with a really generous dose of tinned milk and sugar in it” and for him, it was pure happiness.

I was moved to read that at the very first weekend of their captivity at Changi, the British and Australian comrades transformed a Mosque of aesthetic design in the Indian Barrack into a beautiful, functioning Church in a day.

Padre Cordingly knew exactly whom he should trust with this important task. He gave a drawing of the St George’s Cross to Staff Sergeant Harry Stogden of the 18th Division Royal Army Ordnance Corps (RAOC). It must have been a satisfying task for a master like Sergeant Stogden, a mechanical engineer. With his skill, he made the cross from a 4.5 inch Howitzer shell. Sergeant Harry Stogden remarkably transformed a war symbol to a symbol of hope.

From the information on Bernards Research Diary, the base of the cross was fashioned from the base of a 4.5 Howitzer shell, and the cross itself is made from carefully fashioned strips of brass. At each of the four ends, it carried trefoils engraved with facsimiles of the cap badges of Royal Army Ordinance Corps, Royal Engineers, Royal Northumberland Fusiliers and the Royal Army Service Corps. The base of the cross was engraved with the badge of the Royal Artillery.

It is likely that the Changi Cross was made with a 4.5 inch Howitzer shell like this one that I found on the website of Imperial War Museums: 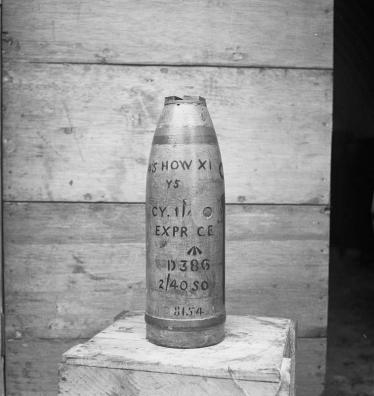 Padre Eric Cordingly and Sergeant Stogden were more than just friends. They were both soldiering in France and they went to Singapore on the same ships. How do I know all these? Bernard Stogden, the son of Sergeant Harry Stogden, sent me this email recently:

I can tell you that I have the book Down to Bedrock and I have read it from cover to cover and it is very good.

The Padre Eric Cordingly and my father were friends while they were POWs. They were both soldiering in France and then went to Singapore on the same ships. it was Eric Cordingly that gave the drawings of the Cross to my father to make, so you see our two families are very close. 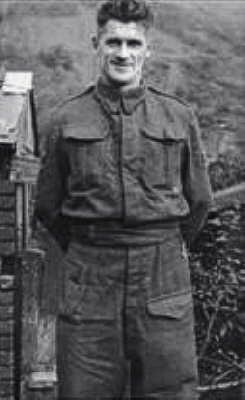 I found in my father’s belongings eighty film negatives and some of which I was able to get printed. I found a picture of Eric in the Mosque that he made into St George’s Church and I have the only known picture of that Mosque which are also in the book.

When I found out about my father in the newsletter that I had from the Japanese Labour Camp Survivors Association (JLCSA) I did a big search to find out more. I taught myself how to use the computer and through that I met a lot of lovely people who gave me a lot of information. I even met the crew of the ship HMS SPEAKER from which my father was buried in the sea at Nagasaki, so in a very short time I managed to gain most of the history of my father’s short life, but I am eager to learn more if there is more out there to be found.

Please keep in touch and keep up the writing.

The Stogden children and their discovery

Bernard Stogden was only four years old when his father – Staff Sergeant Harry Stogden – went to war in Singapore in 1942. Soon after his arrival in Singapore, the Japanese advanced rapidly through Malaya to Singapore, and the British Lieutenant General Arthur Percival surrendered Singapore to the Japanese forces.

This photo of the little boy was that of Bernard Stogden when he was about 4 years old, and it was taken before his father Sergeant Harry Stogden left for war. Bernard believed that his father carried this precious photograph with him while he was a prisoner of war in Singapore, later Japan.

When Bernard’s sister was moving house, she came across the Red Cross bag that their father’s personal effects were sent home in, including some film negatives. Bernard had seen these negatives before but had never realised their significance.

Later, he got some of the negatives developed and a whole new world was opening up to him. He found photographs that his father had taken of the very first St George’s Chapel of Changi. These images are historically significant.

Sergeant Harry Stogden languished in the Changi POW camp in Singapore until May 1943. For over a year in captivity, he was frequently treated in Roberts Hospital with dysentery. Brian Spittle, WordPress blogger of Changi Notes wrote about his own father’s captivity at the same Changi POW camp. Brian Spittle had a clear descripion about Roberts Hospital for the prison camp, which his father described that in the hospital, “some days chaos reigned, with its accompaniment of hardships, pestilence & death.”

The Australian official war artist Murray Griffin completed an oil painting, which is being kept at Australian War Memorial, called Roberts Hospital, Changi while he was a prisoner at Changi in 1943. The painting showed the effects of malnutrition of three men. It also showed the unhygienic conditions, the chipped mugs on wooden boxes and the soiled bedding. You could also sense the overpowering tropical heat and humidity in the ward. The image vividly reflects what Padre Eric Cordingly lamented in his book that many deaths were utterly unnecessary.

While Sergeant Harry Stogden was imprisoned at Changi, he never stopped writing to his wife in England in his little notebook. However, he did not realise that his young wife had died, at the age of twenty four. He never knew his three children were left alone in Britain.

“We were shunted from the children’s home and my mother’s family, and finally I the eldest and my next sister were brought up with my mother’s mother and my youngest sister sent to be brought up by my father’s sister at Enfield. We two were in Wales. We were never a family again.”

While Padre Eric Corningly and 7,000 POWs were sent to build the Burma Railway, known as the Death Railway, Staff Sergeant Harry Stogden was taken from Singapore to Japan by sea and ended up in Fukuoka camp six, working in a coal mine.

Miraculously Sergeant Harry Stogden survived his torment until the war ended. Struggling against disease, he was taken by the Americans to their hospital ship, the USS Haven at Nagasaki. USS Haven was a hospital ship built for the US Navy during the WWII.

Sadly Sergeant Harry Stogden died on board the USS HAVEN from Beri-Beri, on the 15th of September 1945, aged only 38. His body was later transferred to the British Aircraft Carrier HMS Speaker and he was buried with full military honours at sea at Nagasaki.

It is my great honour that Bernard Stogden trusts me and he shares the precious pictures of his father’s burial at sea to us in this post:

Sergeant Harry Stogden died of Beri-Beri on board the USS HAVEN and was buried at sea. (Image credit: Bernard Stogden)

The Remarkable Journey of the Changi Cross Across the Sea

According to a story by Bill Holtham in Bernards Research Diary, St. George’s chapel of Changi was closed when “F” Force was sent up country to Burma. Padre Cordingly packed with him the altar cross and the plaque of St. George’s along with other ornaments.

After the war, Padre Cordingly carefully took these valuable items back to England and kept the cross in his study in Norfolk, East of England. After his death in 1976, Mrs Cordingly continued to care for the Cross. In 1992, on Mrs Cordingly’s suggestion, the cross was returned to Singapore where it was handed over to the Rev. Henry Khoo at the Memorial Chapel. 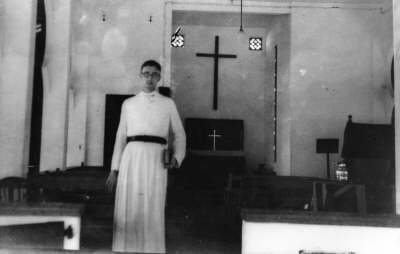 The Changi Cross made by Sergeant Harry Stogden in 1942 had travelled from Singapore’s Changi war camp, to Burma’s Death Railway, then England’s green and pleasant land, and finally back to Singapore again.

My most trusted historian KL Lee from the From Dusk to Dawn blog informed me that Changi Cross is now being displayed in the Chapel section of Changi Museum. In the Chapel now stands the altar which holds the Changi Cross.

On the website of the Changi Museum, it contains these touching words:

“The cross was made by Sgt. Harry Stogden who never made it home and is one of the few original items in the Museum.”

In 2001, the Singapore Tourist Board invited Bernard Stogden and his family of seven to visit Singapore for the opening of the new Changi Museum. He was a guest of honour to place his father’s cross on the altar.

In my next post, I will share with you my interview with Bernard Stogden, on his father, and how his whole life is entwined with Changi Cross, and the Second World War.