I was shocked to see the state of my mother’s ancestral home in China. By today’s modern standard, her ancestral house still looks shabby. However, the house used to be unsafe, dilapidated, and it could not withstand strong wind and rain.

This is the very house that nurtured 4 children, who are now grandparents. These are also my cousins that I have never met.

I gave my mother and sisters a mission when they returned to China last week. I asked them to ask about those letters that we used to send to China from the south of Malaysia and Singapore. These are what my sisters found:

Only a few envelopes are still well kept. I can recognise my sisters’ handwriting. However, all letters have been lost.

My eldest cousin said that as our letters were precious, his father (my mother’s brother) kept all letters neatly together in a file. Everyday, he would ask his sons to read our letters to him and every time he wept over the words in the letters. My uncle was paralysed for about a decade, and these letters from his only sister carried so much dreams, hope and promises. Unfortunately, since his death, the folder containing these carefully straightened letters have been lost.

My mother often praises the diligence, kindness and filial piety of the younger generation in her Chinese family. The younger children are well-educated and run their small businesses. Many of them are still living in the same province where the ancestral home is. They form a system where all siblings take turns to look after the elderly. My mother’s 96-year-old sister in law is happily surrounded by her many grand and great grandchildren. She lives in the new houses regularly though she still prefers the simple living in the ancestral home which carries her memories.

The younger generation now has bigger houses. Now I know what my mother really meant when she commented, “The young ones in China are very able, and their houses are bigger than yours in England! They have everything in China these days.”

Handwriting family tree for my mother to take home to Singapore.

Reminiscence of the past in family’s modern house.

My mother reunited with her family in China. 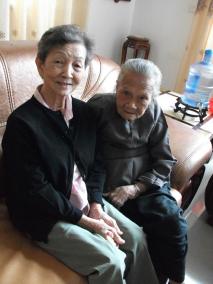 My mother with her 96-year-old sister in law: they are happy that the younger generation now enjoys a better life in China.

The younger generation in China have earned themselves big houses and a comfortable life.

My mother visited China with one of her grandsons (the adult). My mother praises the diligence of the younger generation. Now they live in bigger houses.

My eldest cousin watched as his daughter was writing the family tree. 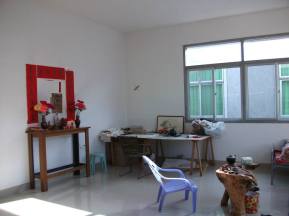 Bigger room — one of the modern houses has 3 floors.

Chairman Mao’s picture is still in many houses.

Children in our Chinese family.

I have some questions as to why the old ancestral home is not refurbished more by the third generation. However, I believe they have done all they could to keep the plot of land, to keep the old house safe, and also to honour their spiritual support – my mother’s deceased brother. The whole neighbourhood is in disrepair, and they have preserved what they could to maintain their traditional way of life – such as wood burning and growing their own vegetables. Many things remain unchanged: their decency, humility, and their graciousness towards their distant relatives scattering around the world. The subtlety of their love is very moving.

11 thoughts on “The unbreakable family ties”